One of my faults is protecting “nice” people that don’t deserve protection. I am not a vengeful person, and I tend to let destruction and chaos into my life because I have this irrational theory that I’m permeable and whatever is thrown at me moves through me without effect.

That theory can work for you in tandem with confidence but it can also overwhelm you if you’re not careful. Chaos and other people’s drama can gets to you and eat at you.

It’s important to know when to let go of what or who has wronged you and move on.

In late 2017, I was experiencing what I can only explain as “reaching the top” of my frustrations with a living situation. It was hard to leave this situation because the city I chose to live in was not-so-subtly raising its rent every day (it felt like that anyway). If I left my living situation, I would pay for it, literally, by eviscerating my already tight budget just a little more…what’s a few less groceries, what’s a couple more dollars in loans from parents? Anything to find peace again. 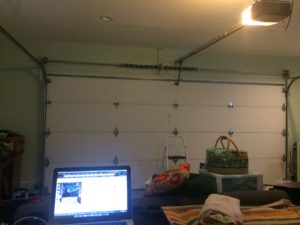 Do you love my new chandelier? Yes, that is a garage door in lieu of a wall.

I was so blinded by the need to get out of my situation, I found a partially finished, illegal garage conversion apartment in the foothills above Burbank. It had ugly mint green paint, NOTHING was even, not one piece of trim, not one mirror, not one light, everything was asymmetrical or on a tilt. As a former stage manager, I cannot tell you how infuriating that was.  It’s only saving grace was the double shower head (that I fixed).

My landlord was nice, and we got along really well. Which is the sad part about what came next. I like meeting new people, but as warm as they were, I still felt like an outsider but I was okay with that. I’m just a tenant, why should I expect any more. But they continued to rope me into family events that I willingly attended and enjoyed, so the line between tenant and friend became blurry on my side. 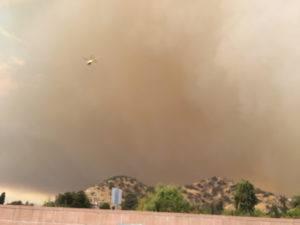 Then 2017 turned into 2018 and just barely out of the gate in February, I was asked to leave. I had signed a lease that would put me there until September of 2018 so I was quite in shock. I had survived 2 fires where we were almost evacuated, a subsequent street mudslide, and now I was about to be homeless. Why? Because the owner of the house, my landlord, wanted to move and rent out the house out for 4 THOUSAND DOLLARS PER MONTH. 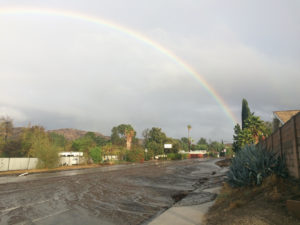 But why do I have to move?  I was paying the actual mortgage on that house with my rent alone and I’m in the garage?

For about a day or two I fumed, cried, and wondered what my options were. I could fight it, that seemed like the right thing to do, but let’s rewind and repeat that I’m a nice person. I don’t usually fight things. I walk away from them to avoid fights. I think I can thank my parents for teaching me that. I don’t know if it’s all that good of a skill sometimes.

Who would want to fight to live in a horribly insulated, ugly apartment with stand offish neighbors, create havoc, create misgivings and THEN stay there. That just tasted sour to me, I couldn’t do that. So I turned to other options.

To add insult to injury, I was told I would get paid my deposit the day I moved out. I had to harass my landlord a bit to get that done, making me “the bad guy”. Their response was “they had two weeks to pay me”. So, now you’re shoving legal rent terminology in my face, after breaking my lease that I had every legal right to use against you but didn’t? That’s when I decided this person was not someone worth being connected to in any fashion, ever again. I couldn’t ever trust them. I ghosted them on all platforms (email, social media, etc) the second the deposit arrived in my account.

Back to my options:

There were none in LA. Rent was beyond expensive, I was getting too much help getting over the tiny hump each month paying the rent, and I decided that going home in defeat was probably the best choice. So I did.

I went back to Texas where half of my extended family lives. It’s great being near them again, and near my Texas friends, but I don’t like this town.  I still don’t know why, but I also don’t “love” Los Angeles but it’s the closest thing to home I have.

I’m using my time wisely, building a non profit, but every day I’m “stuck” here, is a nail in what feels like a box I have to escape. I want to be self-sufficient again. I want to bring amazing things to artists with my non profit this year, and I desperately want to get away from this disgusting weather.

2018 really knocked me on my ass, and every time a friend from LA tells me they miss me, I get angrier that I left, because it’s so hard to go back. I’ve done it twice, and it doesn’t get any easier.

This is me, venting about a year that punched me in the face.

I’ll get back on my feet, I always do, but it’s never without consequences.