Fox in a Corner

It was 1983 and Mr. Fox was planning to get married. He had arrived in Los Angeles to tie the knot with his betrothed but like many love connections, he quickly learned that the family of the bride-to-be was not keen on living arrangements coupled with sin, so he was forced to quickly find a cheap apartment in East Hollywood.

He searched about, thinking mostly of his fiance, trying to find the closest bachelor apartment (an appropriately coined term, if I do say so) and when he happened upon a garden courtyard he snapped up their only remaining studio, located in the back with the worst view and the noisiest neighbors.

He wasn’t going to be there long, so the lack of luxury accommodations didn’t phase him. He would soon be cuddling with his fiance post ceremony and life would be complete.

Then one day the relationship ended, perhaps over money, perhaps over family, Mr. Fox wasn’t one to divulge that much information to strangers. So he stayed in that bachelor apartment to wait out what would happen next in his life.

One year went by and then 20. Soon 30. That’s when I met him, after almost a lifetime of sitting in a tiny, corner pocket, studio apartment. He never changed the paint (or carpet), and lived exactly the life you would expect of a bachelor who’s heyday was probably in the 1940s.

He would make delightful conversation with myself and our neighbors as they came and went through the complex, moving on with their lives as he gently evolved into that kind man in the corner apartment. It was always a joy to bump into him on the way to the mailbox.

Mr. Fox once gave me a painting he was going to take to goodwill. I saw it as he passed by and he offered it to me, saying he couldn’t remember if it was worth anything. I told him it inspired me for its dream like qualities and soon after that it was mine.

I recently learned that Mr. Fox, the permanent bachelor, the kind man in the corner apartment, died this week. A former neighbor at the complex broke the news and I just wanted everyone to know what a kind, sweet, patient person he was. Why some woman never snapped him up, we’ll never know.

See you on the other side, Mr. Fox. 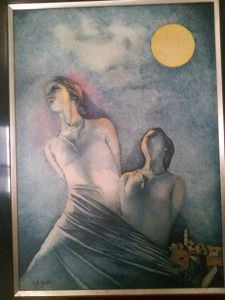