Top Five Moments as a Production Assistant aka Gopher

One of my most loved and used pieces of advice when talking to new writers is to get out and actually make a film before you attempt to write one.

Is it mandatory? No. Will it improve your writing? Yes, in folds.

But with the folding comes delight, terror, and humor. Here are my top five memories of working in the infomercial world. 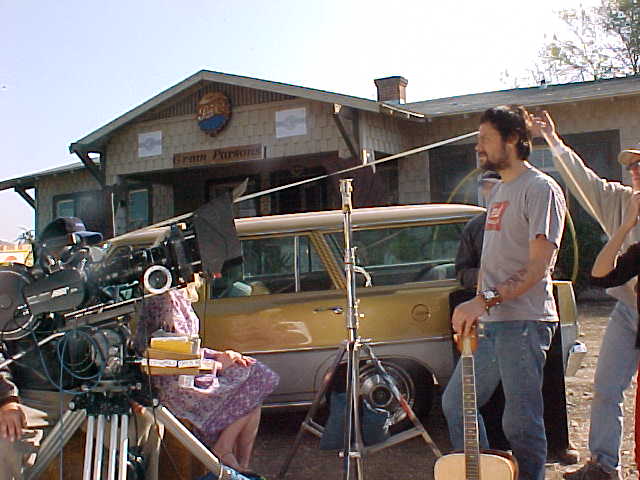 During the fall – spring season, I worked at an Orange County based repertory theater. But summer was always a fight to pay the rent, so when I stumbled upon a production company hiring P.A.s, I applied for the job because I knew someday I was headed to L.A. and the experience would be worth its weight in Oscar statues.  I was very excited to get the position because once I met my co-workers, I realized I was the only female P.A.. Power fist!

After a few days of doing paperwork I didn’t understand (call sheets, etc), they sent me to set.  I was basically a lamb going to slaughter and it was probably one of the most frightening experiences in my life. What do you touch? What don’t you touch? Are those dirty men with their guts hanging out over their tool belts actually smoking cigarettes in the fumes of the generator?  I made it through the day, only getting yelled at once. The biggest lesson on your first day is don’t touch ANYTHING without being told to do so by your immediate supervisor (the A.D.).

With one commercial under my belt, the set me loose with a little more responsibility because I hadn’t burnt anything down yet. We had an oddly late call to the beach where we lugged a million containers (I counted) to a beach. When 6 pm rolled around, I asked why we weren’t shooting. “Oh, no, honey, this is just the gear set up. See you at 4:30 a.m. tomorrow. ” So, basically, it took 8 hours to move everything the set needs to one location when normally it takes 2.

The next day I reported for duty and the A.D. handed me a large, new, paint brush. He said my only job of the day was to keep the actors clean. Clean? “We’re on the beach so they’ll get sandy, so be ready. ”  Okie dokie, sir.  Green as the day was not,  I went to craft service and ate breakfast, armed with my paint brush, awaiting my destiny.

Once the set and crew were ready, the actors were walked on and I’m faced with three well built actors, 2 women and 1 very very very very cut gentleman.

I spent the next 12 hours brushing sand off of glutes, thighs, and six packs.  And instead of being called by my name, they cooed for “Dusty”.

3) Dusty the P.A. and roundabout hero of the homeless

During the same commercial, somewhere near 5 o’ clock in the evening, craft service was asked to start packing up the mid-day snack (hot dogs and burgers).  While this was going on, a homeless man had walked through the set, eyeing the tent where other P.A.s were packing up and grips were eating. There must have been 20 hot dogs left even with the crew completely stuffed, and so, innocent me, I put together a meal for the poor guy.

Not five minutes after this moment, the A.D. is screaming down at me about not encouraging the hobos because they’ll come back in droves. In my head I’m spitting in his face, thinking, fuck, it’s 5 o’clock, we’re not coming back, what is your problem. Scream any louder and you’re going to have a heart attack.

Once the vocal flagellation was complete, he walked away to finish work.  I went right back to craft services and packaged up more hot dogs for the homeless guy and handed all of them to him .

The grips near craft service gave me a standing O.

All I remember about this day was an unbreakable pair of glasses as the focus of the commercial and the hottest car you’ve ever seen. Dusty to the rescue! I spent the entire day removing finger prints and you know EVERYONE had to touch this car.

After an unending amount of  golf and workout infomercials which includes my failed break into show business as a testimonial actor (the commercial never aired), I was told they needed a wardrobe supervisor for an ABC internal industrial commercial. What, no P.A. position? I’m being promoted?  HOTCHA!

The position was really not much more different than what I did as a P.A., they just wanted someone voting on which outfit each ‘cast member’ would wear. No stripes, no white, that was my only order.  But at least my resume was upgraded by the job. I was finally able to work in Hollywood at that point, and nailed my first film as an on-set dresser without an interview.

What do all of these memories have to do with screenwriting?  Every commercial I did, and every film I worked on, no matter what I was doing, I was a part of the process. I learned how to make films and by knowing how to make them, you can write them more effectively.

You’re sorely missing out if you don’t try being a P.A. at least once.  Some writers may disagree with me, but because they haven’t done it, they can’t see the light that shines above you while you’re writing. It really does add to the experience.